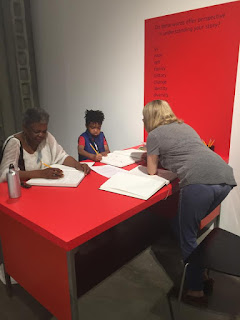 D:  "Because I drank too much chocolate milk as a kid."

I wanted to begin by adding one of my family anecdotes regarding "skin".  It was triggered by an interactive piece referred to as an "educational mode".  These nodes were designed by the staff of LAMAG, including gallery educator Marta Feinstein and director Isabelle Lutterodt, as a place for "reflection"  and "dialogue".  During the opening I was too overly stimulated to sit and write my reflections in the provided sketchbooks.  The exhibition has served to impress upon me how the color of our skin begins its relevance in our family structure.  The dad in my story is my brother who was called "Prieto" by my mother.  In Spanish this refers to a dark-tan person.  It is a common nickname in the Mexican culture.  "Prieta" is for girls.  My niece "G" had just began school when she asked this question.  "Kindergarten" is the beginning of learning and maneuvering racial differences.

"Node #5" contains reflective words like: us, race, self, family, history, change, identity, and diversity, which serve as a base for the gallery visitors.  In the main gallery exist a floor piece with the phrase: "OUR LIVES MATTER".  Everyone's life matters, however, this phrase is a graphic reminder that we are all connected and feel the same kind of pain.  In the same space is a monumental wallpaper, on foam core piece, by Ken Gonzales-Day entitled "41 Objects Arranged by Color". 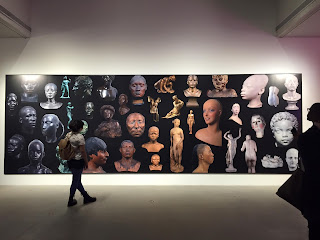 Gonzales-Day's billboard style technique is a contemporary/pop way to reach a broader audience.  The images of sculptural busts, from antiquity, are also displayed in a familiar, academic, manner.  Most people have seen these images in their high school and college history books or on posters advertising the local museum of man.  The variety of profiles and the warm tones of the central figures, emphasizes that these artworks were derived from human beings.  The stones become flesh suspended in time.

"Skin" interpreted as shelter is presented in a site specific piece by Holly Tempo.  The long, narrow room with high ceilings, creates a vault, or room found in an ancient temple.  Tempo uses Frank Lloyd Wright's Hollyhock House, at Barnsdall Park, as the inspiration for the Mayan tile and hollyhock designs she has painted in the room.  Additionally, there are framed collages made with cardboard to symbolize the cardboard shelters runaway youth, in Los Angeles, sometimes use for sleeping.  Tempo specified the gay youth that are thrown out of their homes because of their sexual identity.  Cardboard Revival 2016, subliminally embraces the divinely inspired Mayan architectural designs with the memories recalled by the seeds of the hollyhock.  Hollyhocks are symbols of abundance, fertility, and considered "un premio de apoyo", (a prize/gift of support in the Mexican/Central American culture).  Tempo, an associate professor (painting) at Otis Art Institute, dug deeper by sharing her project with some of her painting students.  Her multicultural crew of students became artists on the job.  The message of the exhibition also exposes future artists to use their art for messages of love, understanding, remembering and reflecting our ancestors. 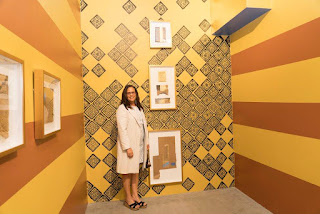 Ann Le and Kaitlynn Redell's mixed-media works refer to their Asian ancestry.  Le's photo/collage works are also reflective of "home, sanctuary, and shelter" by using wallpaper floral designs to replace the people's faces in the photos. Wallpaper can serve as forms of skins in our family memories.  Layers of wallpaper in a home can attach remembrances of unity and the longevity of a family.  The floral wallpaper also reminded me of a personal experience with my grandmother's purchase of new kitchen linoleum in the late l950's.  My father laid it out on the kitchen floor and my brother and I rolled around on the floor trying to flatten the linoleum.  It is one of my favorite childhood memories.  I had permission to roll around foolishly on a Pollack splattered design long before being introduced to abstract expressionism in college.  As a visual artist Le probably absorbed patterns and colors from her family environments.
Memory is skin. 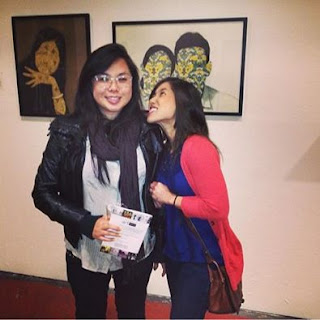 Ann Le and friend in front of her work.

Kaitlynn Redell exhibits two pieces, one  is an independent mixed media painting in which she uses photographs of the 1920's Chinese American actress Anna May Wong.  Imposter , a photograph from The Residents Series is the collaborative piece she shares with her creative partner of Redell and Jimenez.  Redell stated that their partnership "shares a mutual interest in the concept of inbetweeness, a space of fluidity and negotiation, where predetermined categories of the body, gender, history, and psychology are constantly formed and reformed." Redell's mother is Chinese, the inbetweeness she describes is perpetuated by people asking "what are you?".  This is a question I am constantly being asked.  I can fit into many cultures, the older I get the more Asian I appear to people.  I always say: "there are all kinds of Mexicans." 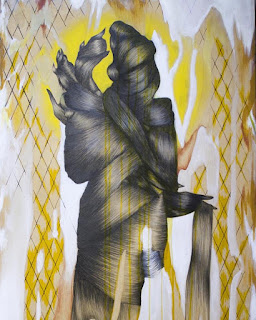 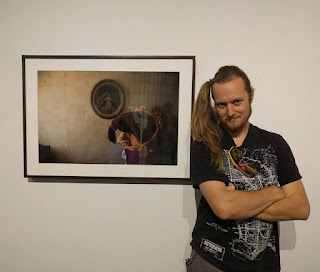 The SKIN  exhibition combines a variety of interpretations from the obvious of skin color, to conceptual approaches related to artists' homes and environments.  The artists do agree on the integration of mind, body, and spirit to communicate the purpose of the exhibition.  The color of our skin still matters.  SKIN uses the beauty and creativity of visual arts to remind the viewers of our connections.  It's like a "maternal broken record" which continually illustrates the hope for community and compassion.