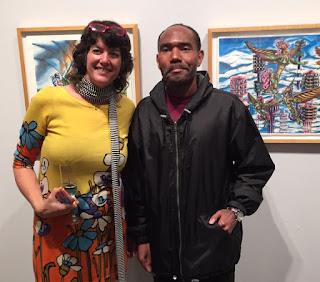 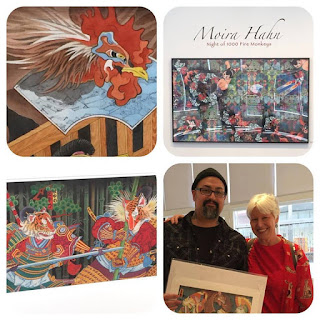 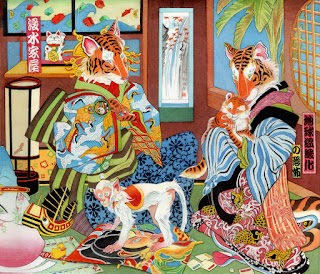 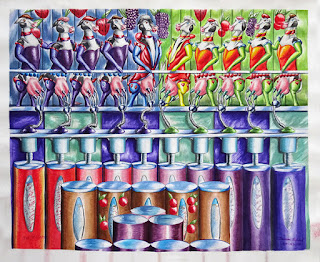 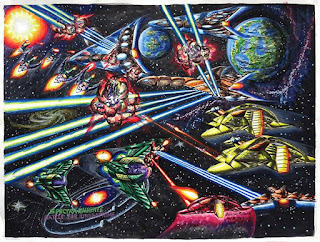 Currently there are two artists exhibiting in Chinatown who depict animals with human virtues of family unity existing with instinctual  territorial aggression.   Fantastic situations that exist in the minds of Moira Hahn and Deveron Richard.  During the opening night of these exhibitions, I was speaking with Gina Stephniuk of Good Luck Gallery regarding the reciprocal connection of the two artists.  She said they both used the same materials and themes.  However, Richard has developed a unique technique with watercolor which gives his drawings a graphic quality.  Many viewers thought the images were pigmented prints or pastels because of their opacity. Good Luck Gallery works with artists who are not formally trained-"Outsider Art".  Gregorio Escalante Gallery, works with both formally trained and artist who are also " self-taught rebels".  (*All artists are rebels.")

Both galleries are re-defining what makes an artist.  There aren't hopes for a final definition, however the artwork is beginning to parallel.  Moira Hahn is a formally trained artist who combines Japanese allegory with contemporary Japanese Anime and pop images.  Anthropomorphic imagery has been used to describe both artists' work.  Part of Hahn's focus is on the Chinese-Japanese Animal Zodiac.  She is a "fire monkey" which is the title of her exhibition and the animal and element of 2016.  Hahn is a prolific artist and storyteller that depicts prosaic imagery of home and family as seen in "Under Water World"  where the "blessed trinity" is a pair of tigers wearing traditional Japanese kimonos, a baby tiger, and a monkey as a guardian angel and guide.  Tigers in the animal zodiac are characterized as playful and child-like.  They are good with children because they never grow up themselves.  Hahn's animal themes are also providential in terms of animals' safety and protection from abuse and extinction.  PETA , ASPCA, and other animal protection groups are increasingly providing awareness to human society.  Hahn's empathetic delivery  explodes like Japanese fireworks dedicated to pattern, color,  and haptic desires.  Through her artwork audiences experience playful, palatable and multi-cultural messages for inter-species relationships.

Deveron Richard's work time travels through multiple dimensions with females flying the flags of resilience. Adaptability does not mean conformity.  In "Milkets" Richard portrays an assembly-line of cows attached to milking machines.  Even though the cows look "contented", as advertised by dairy companies, there is a broader message of solidarity to prevent extinction.  The cow is also a symbol of the sanctity of motherhood.  Additionally, the watercolors portraying emotionally familiar interstellar combat are messages for preserving our planet and in the case of "Spectra Knights Battle for Birdra Prime"- multiple planets.

It is evident in both exhibitions that Hahn and Richard are artists who understand the value of "life in the details".  Their work is a definitive example of how an artist's mind selects and dissects imagery through all their senses and produce artwork that extols all life forms.